Went to Dish and Spoon in suburban Camberwell the other day for brunch for no special reason, just have some nice food. It’s a pretty popular place in the suburbs, with a pretty good selection on the menu. It was bustling on a Sunday morning, but they managed to get people in and out at a reasonable pace, no super long queues. For me, the options came down to the eggs benedict or the beef brisket sandwich, I think I will go with the sandwich next time and get chips (thick cut chips, it took every ounce of my being to resist), it’s saying something, the food was good enough to consider going back.

The eggs benedict comes with ham hock (as opposed to smoked salmon), poached eggs, and some jalapeños on a brioche bun. This is my usual for brunch, I just really like hollandaise sauce I guess. This was pretty much spot on (the eggs might have been ever so slightly over cooked, but still mostly runny). Plenty of sauce and full of flavour.

Emmy had the risotto hash which sounds quite interesting, she added some of that shakshouka (sujuk) sausage and swapped the poached egg for some scrambled (for obvious reasons). The fact that I only got to try a couple slices of the sausage pretty much says it all, the hash was crunchy, a bit like the claypot rice that has stuck to the clay pot :D. 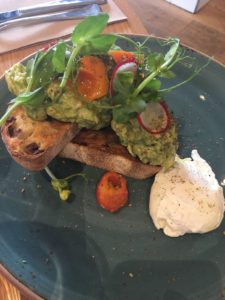 There was also an order of green apple avocado smash, which I didn’t get a taste of at all so can only assume from the picture and my own experience that it also hit the spot.

There is also a nice little kids menu, Oscar had the pikelets which come with strawberries drizzled with maple syrup. For only five dollars this was really good value as kids meals usually cost 8-10$ at other places, and the nice thing was that Oscar actually ate most of it and liked it, especially the caster sugar :D.

I know exactly what I’m going to have if (when) we go back, the beef brisket sandwich and thick cut chips, unless something comes up on the specials board that strikes my fancy. They didn’t have anything that stood out when we went, but apparently there is a lobster omelette that has appeared and if it did show up again could be something to consider. Two thumbs up here.

Wow, it’s only been two months since my last post, I thought it’d been longer :(. Oh well, last week (Good Friday it was, actually) we went up to Sassafras in the Dandenongs as it is one of the few places in Melbourne where anything is open on such holy day. Apart from wandering around the local artisan shops – we found a nice, reasonably priced painting (by local artist Belinda Volkmer) at Miloko for our room!) –

we had brunch at Café de Beaumarchais, we’d been here before but with a big bunch of people (who were quite annoying) so maybe we didn’t enjoy it as much last time, thought we’d better give it another chance without any distractions (even the little boy was not with us!).

So only needing to worry about ourselves deciding what to eat was so much easier, drinks first and that’s usually not even a question (as we don’t drink coffee).

A couple of Parisian Hot Chocolates thanks, now I’m not sure what the difference between this one and the regular hot chocolate is (perhaps it is darker and less sweet? That’s pure speculation though) but it was good, not that overly sweet stuff.

On to the food which is what everyone is really interested in, we went with the special croissant (pesto, tomato, cheese, can’t remember the cold cut but possibly ham, and some kind of nut (probably), and the three cheese board. Emmy ate most of the croissant so I can’t really comment on that one but the one bite I had was pretty good. The highlight though was really the cheese board.

There was a soft cheese, a less soft cheese, and a harder cheese (like cheddar) to go with a couple of baguettes, pickles, quince paste, and some lavosh (like pappadams but smaller?), and I know, it doesn’t look like a lot, but when you eat at a reasonable pace and with a hot choc as well, it does fill you up quite well.

I love pickles so that was a nice side and the sourness worked really well with the sweet quince paste. Each of the cheeses were great, I’d probably give my nod to the middle softness one, it was just right :D. The bread was good too and had that nice crusty crust even though it wasn’t toasted. It leaves you wondering, where do they source there cheese from and how do I get some for myself! Definitely a more enjoyable experience than last time and definitely a thumbs up and recommend from me.

So we had a baby shower to get to over the weekend, scheduled for 1pm which is a bit of an awkward time when you have a toddler who has to have lunch and a nap. We were actually wanting to go to Left Field, which is an amazingly popular cafe in Carnegie, but driving past and seeing how busy it was and the queues streaming into the street with more people seemingly appearing everywhere, we decided that we had neither the time, nor the patience to wait. We went to another cafe in Carnegie closer to the main strip that we’ve been to before, Spilt Milk. I only had a very vague memory of this place from the last time (about two years ago), and afterwards I can now safely say I know why.

The food on the menu is peculiarly named, with each dish going by the name of an animal, maybe to make ordering easier. Emmy had the chilli eggs (I can’t remember the animal name) while I went with the donkey aka poached eggs with bacon. Reading the menu, the prices were a bit lower than I’m used to, and then when the meals came out, I could see why, they’re quite small and (for me) more suitable for a pure (first meal of the day) breakfast than a brunch/lunch meal. The chilli eggs looked all right, and while my poached eggs were over cooked, it didn’t ruin the meal, the aioli was quite tasty. I doubt that we’ll be going back to this place though if we can remember this meal, nothing special, and small-ish portions.

Another week, another foodie post, you get the idea, this has basically become a foodie blog over the past year, I guess that’s where the big bucks are. This cafe is pretty close to our place, like five minutes drive and we didn’t even know it existed. Fortunately for us our friends visiting from Adelaide had brunch here a couple weeks ago and recommended it to us. They also recommended another place to us which I’m sure we’ll visit in the future at some point as well.

Straight into the food, emmy ordered the sweet potato corn fritters which come with poached eggs, she didn’t offer me any so I can only presume that they were indeed very well done. I did have a little crumb from the corn fritters and it was very crunchy indeed, always a good thing. She had a hot chocolate with that, it was on the slightly bitter side which is our preference, so two thumbs up right there.

Having had breakfast not long before we left for brunch, I didn’t feel up for the burger and chips, so I took it easy and settled for the ruben sandwich, a nicely toasted sanga with all those nice salty cold cut meats, cheese, mustard and some pickles on top. I know what you’re thinking, that sounds bloody amazing, and yep, it seems like something that would be pretty hard to stuff up, one more thumb up from me. Look at it, this is obviously a very subdued version but that was perfect for how I was feeling. I also ordered the red rita juice there that had beetroot, ginger, apple, and some other fruity thing blended in, nice and sour, with a bit of sweetness too.

Oscar loved his mushrooms and bread, the scrambled eggs not so much, but I don’t think that was anything to do with the eggs, just his preference on the day. If we had a regular, this would probably be it, I’m sure when we’re feeling lazy this will probably be the place that I vote for. There are a bunch of other sandwiches I need to try (as well as the burger), and probably the eggs benedict too (although it’s ham not salmon).